Social Media:  I have used Facebook for a long time mainly to keep in touch with friends and family and occasionally to feature photographic work I’d done, but as  had no aspirations to making it a proper business, I never pushed that on FB.  I have had an Instagram account for some time as well, but had rarely posted anything there.  Despite that, I had over 50 followers when I began posting current work this week.  I don’t see Instagram necessarily as the vehicle that will bring me work, but I know the added exposure and distribution of my work is a generally good thing.

I was not keen on the Viral Image task either as an on or off line exercise.  I live in a very small Scottish burgh and the idea of plastering an image around town even on the few proper boards let alone across the breadth of the conservation district seemed to me to be an act of defacement that I couldn’t bring myself to, particularly since I am already well known within the town and I think it would raise more issues than benefit.

Webinar with Sophie:  I had the luxury of a one on one with Sophie this week as I was the only person signed up in that slot.  I sent a link to some of my current work to Sophie so we could discuss where I was and where I needed to be going.  I was a very helpful discussion.

First Sophie was encouraged by the non-project specific work as she sees it as useful to training my eye as a photographer and keeping the fun in the work.  She asked if I find it easier or more difficult to do project work and my reply was qualified.  I have diverse interests photographically as I mentioned in an earlier post.  I also find it quite easy to turn those interests, whether on an afternoon’s shoot or across a longer span of time into projects.  That is something that has changed dramatically with this course.  Previously I rarely saw my photographic work as anything other than the individual photographs I made.  Now with almost every photograph I make I can see an outcome; how it fits or might fit into a larger body of work or end product.  Each photo inspires me to bigger ideas because I always if there is one scene that captures my attention and my camera, there are more to be found.

The qualification was with respect to my MA project work which has been a bit more difficult due the circumstances associated with the planning application.  I am a bit stalled on the repeat photography elements of the project since little is happening after the project was called in by the Scottish Government for additional review.  On the wildlife side however, it is the beginning of the “Highland Gathering” of birds that winter on Loch Fleet and the north end of Coul Links.  While it is early in the migration and only a small fraction of the birds have arrived, I have had some really successful shoots already. 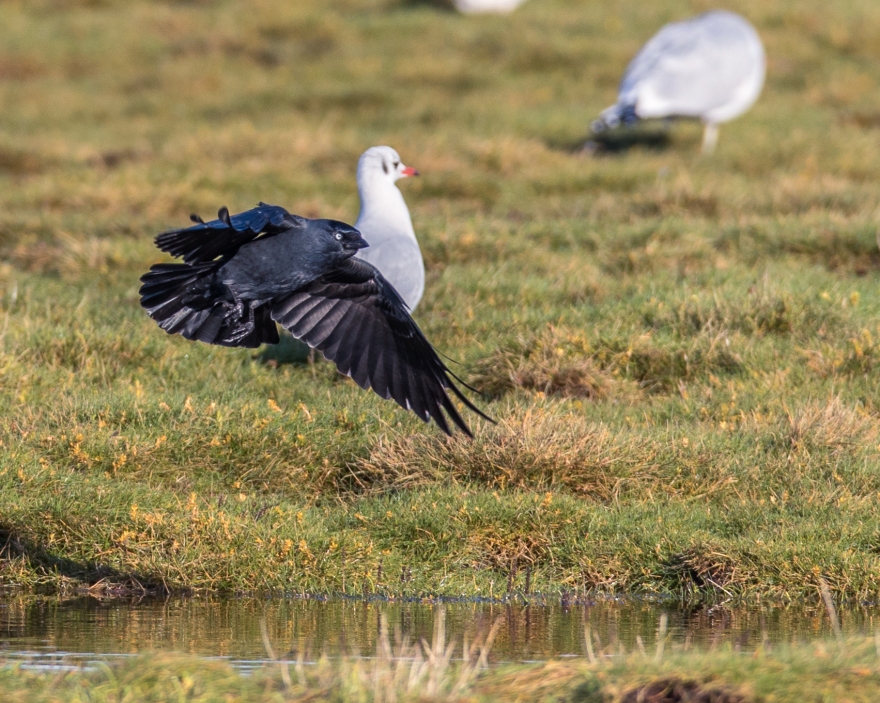 Sophie then asked how I feel about photographing people and I replied that I have always been a bit uncomfortable with it, but that I had been making an effort, with some good results, at doing more; particularly outdoor environmental portraits.  Sophie challenged me to set a target of  8 or 10 portraits as part of my work and as we were talking I realised how many people use the north end of Coul Links and the perimeters of Loch Fleet every day their dogs, enjoy the outdoors, or watch the birds and marine mammals that inhabit that patch of land and sea.  In fact, I missed an amazing opportunity last Wednesday because right where I set up to photograph birds, a gentleman and his wife were encamped behind their estate vehicle with two chairs a wee tea table and a spotting scope.  When I arrived the gent was intent on birding while the lady sat comfortably in her chair reading her Kindle.  It would have been a perfect photo and because I just do not think about photographing people I missed it.  At least four other people came up to me for a chat about what was out on Loch Fleet and likewise never thought about asking if I could take their photo.  So lesson learned and in response to Sophie’s challenge I will be looking for those opportunities over the coming weeks.

I am re-energised about my project and really appreciated Sophie’s encouragement and advise.