When it became apparent I needed to have display fixtures that would enhance the viewing of my photographs and contribute to the immersive experience that I was trying to create, I had to determine what would be necessary, create a design and then either find someone who could fabricate them for me or a place where I could build them.  I also had to work out the lighting requirements and then source and purchase suitable fixtures as a well as a way to mount them.

Obviously, the size of the venue and the space available was a limiting factor in the size and placement of the fixtures.  I also wanted to produce large format prints at least A1 and potentially A0 which meant the faces of the display units needed to be at least 1 metre wide and for the lighting to be effective and safely out of viewers way the top of the need to be at least 2 metres high and optimally 2.4 metres high which would allow the photos to be further isolated from the surroundings in the viewer’s perspective, and would also minimise cuts since the stock size for ply panels is 2.4 metres by 1.2 metres.

Building these fixtures for the 13 large format prints and 3 collages of miniatures plus the video trailer that would be playing on a monitor as the first element of the exhibit would require a substantial amount of material, time and expense to construct so I didn’t want them to be a one-off use and needed to design them to be reconfigurable, transportable, and reusable. They also needed to be stable when erected so as not to create any health or safety issues and cost had to be a consideration.

I created design sketches and detailed dimensions as a basis for discussing the project with area joiners.  I quickly discovered that many of the areas joiners are flush with work and not available to take on my project and it also became apparent that only a joiner with a workshop could produce them with he consistency that would be required to assemble the panel configurations flexibly. Fortunately, I did find a joinery firm that would take on the work and which would allow me to participate in the construction.

The design consisted of 36 1m x 1.2m panels, 2 of which would be fixed together along the 1m side by a piano hinge to allow the panels to fold when not in use and unfold to the full 2.4m height by 1m width when in use.  This facilitated transport, handling and storage.  The original design had the panels then joined together in venue assembly with a series of loose pin hinges that would connect one panel to the next and allow for various configurations.  Unfortunately the variation in the wood and the tolerances required to mount the hinges so that any panel could fix to any other panel proved insurmountable and an alternative had to be derived.  I amended the design to use 45 x 45mm blocks from the same material used to construct the frames and bolt the panels together.  I resulted in limiting the future configurations to either 90 degree or 180 degree assemblies, but that shouldn’t be too limiting. 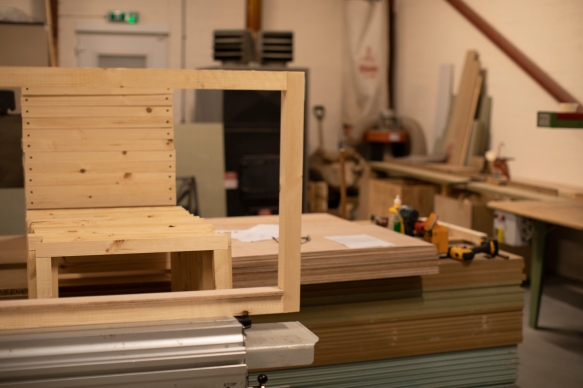 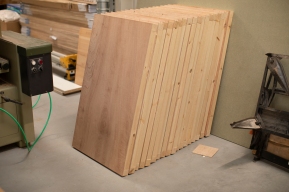 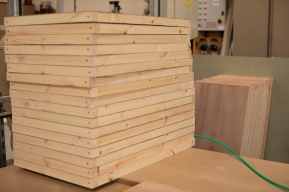 Once the panels were assembled, they had to be painted.  I chose to use a matte black paint to isolate the photo and minimise any glare from the lights.  I was able to source 5w LED spotlights that fixed with spring clamps.  I calculated that if they were mounted at the top of the 2.4m panel and extended out 750mm they would cast the correct amount of light on each photo without blowing out the surrounding area.  Each fixture would have a photo on each side necessitating 4 lights per fixture.  Each light had only a 1m cord so I still had to work out how to get mains power to fixtures.  Fortunately, the Dornoch Social Club had a number of overhead switched outlet that had been intended to service stage lighting at one time and with the help of a local electrician we were able to wire flex cable from power strips to the switch outlets. 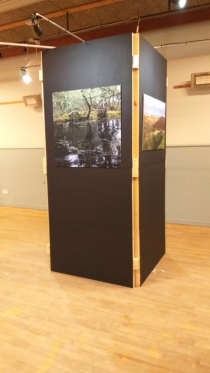 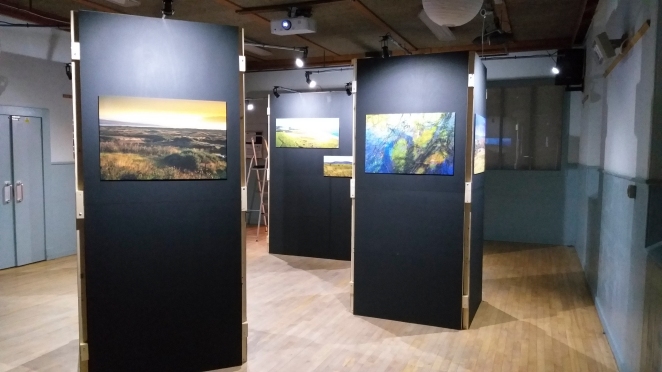 Once the fixtures were assembled at the venue and tested it was time to hang photos  and get on with the show.