Networking is second nature to me after over 40 years of work experience working in and leading large organisations, developing business domestically and internationally, consulting, and then owning two businesses.  My photographic practice didn’t start with the intention of becoming another business, but I find myself, almost exclusively through networking, getting commissions, selling work and being as busy as I wish to be.  I was invited to talk to another group next week as word had gotten around from the last group I spoke to had been very enthusiastically received.  It was networking that allowed me to get the space for my physical exhibition last August and that led to my work being permanently on display for sale there.

I belong to the local camera club which meets every other week and holds monthly competitions as well as conducting educational programs and hosting guest speakers.  I have learned a lot through this group and the people in it and have had quite a (sometimes humbling) education into the world of photo competitions and “what sells” with judges.  I the most recent competition my entry in the colour category won and was featured in the local newspaper, which again generates interest in my work and prompts conversations and enquiries. 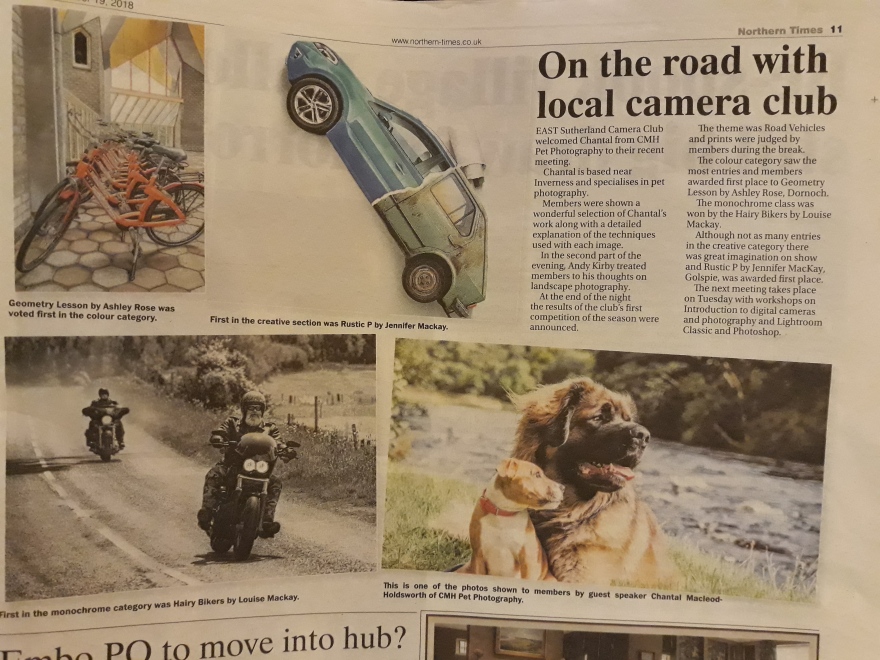 Social media is just another form of networking. Until recently I hadn’t used Instagram very much and I restricted posting of photos to my Facebook account, again largely because I wasn’t intending to promote a business.  However, beginning to use Instagram and posting simultaneously to FB has increased awareness of my work.  A recent commission arose from a viewing of the video I did last term on my project, Coul Links, that was shown at my exhibition opening and submitted as part of my Surfaces and Strategies WIP.  I was asked to produce a video using my drone to promote the business where I held my exhibition.  The owner posted the final product on Facebook and in one day had nearly 2000 views.  I expect that as a result, more offers of work will be coming my way.

I have worked within my network in the past two weeks to secure commitments from two new outlets for distribution of my books; the one already in print and forthcoming projects.  I have joined the RPS but have not yet been able to take advantage of the opportunities that presents to network yet.  I do hope to submit a panel for distinction early next year and that may offer some additional networking opportunities.

I realise I am in a different place in life than some of the others on this course and while I find in person networking really to be just an extension of my day to day existence, others may find it more difficult.  I think it is easy to conflate the term networking with “selling your work” and that is more difficult for most of us.  Instead I think of “networking” as a way to get to know people, and for others to get to know you, and more importantly remember you.  Your work will come up at some point, but that isn’t the prime focus going into the encounter.  Learn something about the person you are meeting and what they do.  It may be that in the end the secondary and tertiary connections that come from that initial encounter are the ones that will make a difference for you or for them.  Maybe you know someone who can do something for that person and they might know someone who knows someone you should meet.  Networking usually requires time and patience.  You don’t have a jumper just after casting the yarn onto your needle; you must knit awhile to see what comes of your efforts.