In his book, On Being a Photographer, Bill Jay recalled being told by philosopher-poet-artist Michel Butor, one of his teachers, that “truth was like a photograph in which thousands of shades from black to white, and including both extremes, were necessary for full revelation. But of course, most people in this day and age insist the truth is black, or white, and deny the beauty of the whole.”

I began to think about the realities of that statement, and its applicability to my photographic practice and more broadly to the current every day world.  I find the assertion that many people want only to think in terms of truth being black or white to be quite true in the United States and particularly in the part of South Carolina where I spend some of the year.  When considered in photographic terms the absurdities of that notion are quite evident.

What follows is a series of four images; all the identical image as the starting point.  The first is overexposed to render the result pure white.

The second image is underexposed so that it renders in pure black.

The third image properly exposed in monochrome begins to reveal some of the “truth’ that was absent in the prior two photos. In this photo we begin to see the complexities and intricacies of the scene in the subtle shades of grey and the small bits of pure black and white. 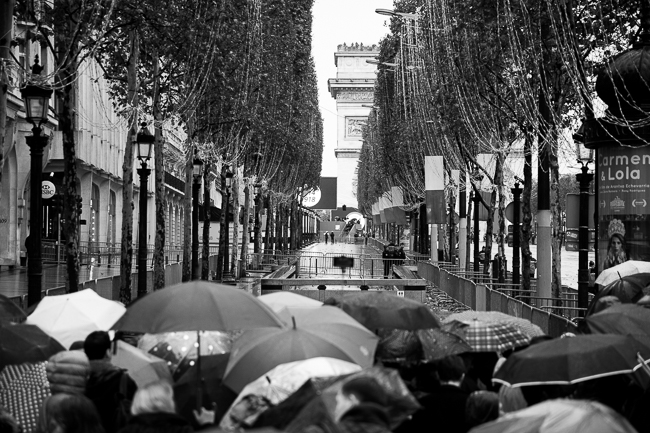 And finally, as originally captured in full colour we find “truth” that was not apparent in any of the prior rendering of this image. The full complexities of the scene are revealed when considered in colour. 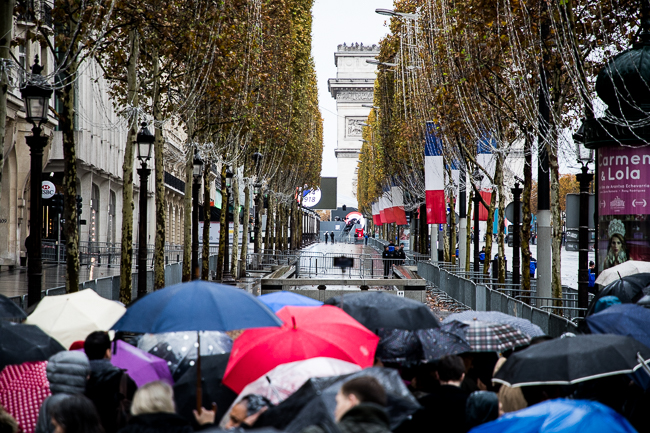 Here it is possible to see the scene of people lining the Champs Elysees in Paris in the rain for the commemoration of the Centenary of the Armistice ending World War I on 11 November 2018.

Is it the total “truth”?  No, because the image cannot reveal the sound of the guns falling silent and the bells beginning to chime and depth of emotion felt in that crowd as that happened, but it is far more truthful than any of the white, black or even shades of gray photographs.

My photographic practice is fundamentally documentary in character so the reality of the “thing itself” or the “truth” of the image is very important to me.  Can an image ever reveal the total truth?  I am not convinced a single image alone can ever do that.  Perhaps a series or images with associated text can come as close as possible, but truth is an elusive animal.  Very few truths are absolute.  One though is that wee live in a world filled with colour.  To ignore that and attempt to see it only in black or white is to deny truth entirely.  Truth is intricate, complex and inseparable from its whole.  It can only exist in the context of the full range of colour of which it is comprised.

We all, and especially our leaders, be they political, religious, or otherwise would do well to remember this.